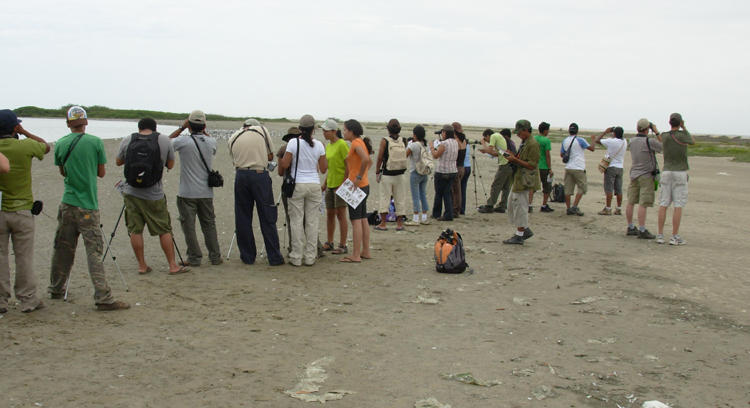 Chorlitos in the Yeso Valley, Chile

For the last several years, my Chilean and Alaskan colleagues have been studying an Andean endemic shorebird, the Diademed Sandpiper-Plover (Chorlito), in the Yeso Valley southeast of Santiago, Chile.

Chorlitos nest in the gravel along mineralized streams and rivers and in high-elevation wetlands known as vegas. I was able to join this great team in January 2012; however, our ascent to the Yeso was delayed due to a mudslide that made the road impassable. After searching a long time for some cabañas late on a popular tourist weekend, we got a few hours of sleep in a campground and headed up the next morning. Our team spent five days nest- finding, counting, and capturing and marking chorlitos. It was a tremendous experience to find so many of these unique shorebirds. Besides chorlitos, we observed Andean Condors, Gray-breasted Seedsnipes, Andean Hillstars, Crag Chilias, and Black-fronted Ground Tyrants. It was a spectacular place to work, and the changing light on the Andean mountains was incredible. Conservation issues abound to ensure the continued existence of chorlitos and other high- elevation wetland birds in the Andes. I look forward to continuing our collaboration in the Andes of Chile.

Over the last two summers (2010-2011), I have been working with colleagues in Alaska to develop and implement surveys for the roselaari subspecies of Red Knot, which breeds in northwestern Alaska. Unlike most shorebirds, Red Knots nest in alpine habitats in Cape Krusenstern National Monument and on the Seward Peninsula. Surveys involved flying by helicopter to randomly selected ridgelines and spending one to six hours searching the mountain terrain. We detected 33 knots on 13% of plots at Cape Krusenstern and 87 knots on 28% of plots on the Seward Peninsula. The majority of detections occurred within 25 km of the coast. We also ran into other alpine-nesting shorebirds (American Golden-Plovers, Surfbirds, Rock Sandpipers, and Wandering Tattlers), brown bears, and musk oxen. To determine migratory connectivity, my colleagues individually marked birds and deployed geolocators (small tracking devices) on 19 adults in 2010 and 12 adults in 2011. We have seen birds marked on Baja California, Mexico, in Alaska and hope the geolocators will shed light on other wintering areas. We are interested in these roselaari Red Knots because we suspect that less than 20,000 exist in the world.

Heather and I had the opportunity to take a Conscious Journey trip to the Tibetan Kham region of Sichuan Province, China. Historically, Kham was situated between Tibetan rule from Lhasa in the west and Chinese provinces to the east. We traveled to Kham from the city of Chengdu, where we left the humid heat of the sub-tropics to the coolness of the Tibetan Plateau. We started our trip in Tagong and spent the next 10 days touring monasteries and nunneries and hiking through alpine grasslands.

We stayed in family homes well off the beaten tourist path, where got to see a hint of traditional Tibetan life. Despite the language differences, all the Tibetan people we met were generous and engaging. Yaks were ever-present and we partook of many yak products – butter tea, milk tea, cheese, yogurt, and steaks. One night we tried our hand at making momos, which are steamed dumplings filled with meat and vegetables, much to the entertainment of our hosts. We horse-trekked up to 15,000 feet where we were rewarded with a (clouded) view of Mt. Gongkar and stumbled across Tibetan Snowcocks and Tibetan Snowfinches. The noisy city of Chengdu was a rude transition back to the US after the serenity of the Tibetan Plateau.

We suggest you check out http://www.consciousjourneys.org/ for a great traveling experience.